The L train shutdown, which started this past weekend and lasts through May 18th, has already riled plenty of straphangers.

But publicly decrying this particular subway line’s shortcomings (which arecent study indicates are comparable to subway woes elsewhere in town) has long been a North Brooklyn pastime.

For evidence of this, check out the masterpieces of public grievance that comprise the reviews on the L train’s Yelp page.

We herein present some of the most noteworthy gripes about the train New Yorkers love to hate:

All reviews are credited to Yelp, and may be abbreviated for clarity.

Yelper Jamie C.’s review is appropriately filed under Yelp review list “Yeah, Imma HATER!” She remarks on the “utter exultation” she felt when she no longer had to commute on the L:

Some Yelpers have doubts about what sort of entities might be responsible for the L’s mysterious ways.

For example, Max T. seems fairly certain that the L train is run by robots, who do not care whether passengers die. 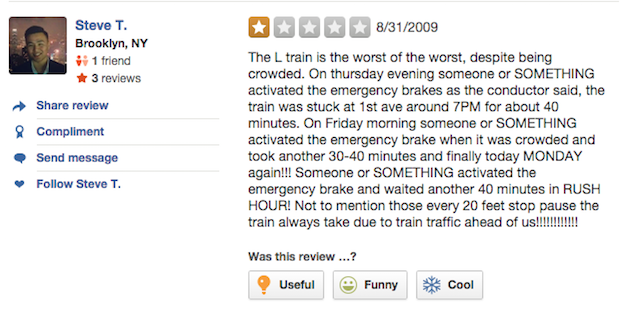 Does this mean the L train is haunted? Perhaps extraterrestrials are controlling it? No word on whether special agents Mulder and Scully have looked into this one.

Other complaints about the L train are….well, exactly what you would expect.

And Yelp user A.A. furnished a handy log of L train annoyances, which casts a little bit of light on that whole “hipster” matter.

So there you have it, folks! if you ever find yourself wondering what it’s like to ride New York’s most talked-about subway line, just open up your web browser and check out the same site you use to find perfectly spelled, non-emotional restaurant reviews. It’s the most exciting account of public transportation you’ll read all day.