One image depicts a woman moaning in a passionate embrace. Another shows the eye-catching results of a breast enhancement. A third promotes extra-large condoms.

Advertisers have long pushed boundaries with provocative ads to capture the attention of riders in New York’s subway system. But not long ago, one went too far.

The company that sells subway ads recently objected to a picture of a pantsless woman with her legs wrapped around a shirtless man. The moving company behind the proposed ad promoted its efforts to protect personal property with the tagline, “Always have protection.”

“I’m sorry, but it’s too suggestive,” a representative of the company, Outfront Media, wrote in an email last month rejecting the ad.

It is no easy task keeping New York’s trains free of the racy images found elsewhere in the city.

With scantily clad bodies lurking around every corner on billboards and magazines, the subway might be one of the last bastions of modesty in public.

The advertiser, Dumbo Moving and Storage, hoped the ad would make riders do a double take. The image hints at an intimate encounter without showing it and even promotes a positive message about safe sex, said Lior Rachmany, the company’s chief executive.

“Obviously it’s kind of intriguing to the eye,” Mr. Rachmany said, “but it’s not too suggestive, if you ask me.”

An ad for breast augmentation surgery.
MICHAEL APPLETON FOR THE NEW YORK TIMES

Dean Crutchfield, a senior vice president at Sterling Brands, a brand consulting firm, said the moving company ad clearly depicted sexual activity and had nothing to do with the business.

“Sex does sell, but does it sell a moving service?” Mr. Crutchfield said. “I would have to question whether that is appropriate.”

The state-run Metropolitan Transportation Authority says it is trying to maintain a family-friendly environment for passengers young and old.

The authority’s ad space has long been a battleground for clashes over decency. The governor’s office complained last year about the breast enhancement ad, citing a report in The Daily News that compared it to a strip club billboard, and asked the agency to review its standards. 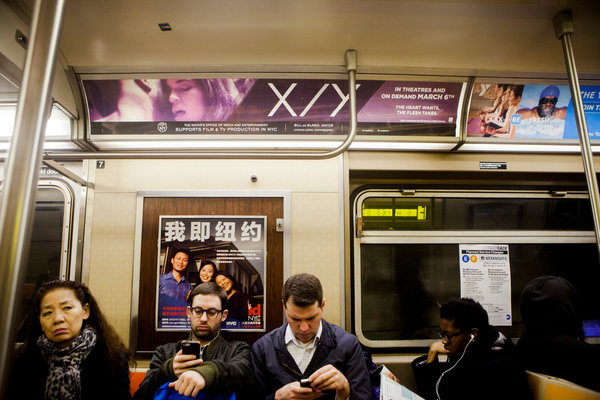 An image with the caption “The heart wants, the flesh takes” appears in an ad for the city’s “Made in NY” effort supporting local film production.
SAM HODGSON FOR THE NEW YORK TIMES

In 2010, the authority removed a Georgi Vodka ad showing a woman’s bikini-clad bottom from some city buses after Hasidic leaders in Brooklyn complained. And it created new rules for ads in the 1990s because of a Calvin Klein underwear campaign that appeared to show under-age models in sultry poses.

The transportation authority has also faced broader challenges over its ads and criticism about limiting free speech. One group, the American Freedom Defense Initiative, sued the agency when it declined to run a controversial ad about jihad and when its advertising partner rejected an ad about a proposed mosque near the World Trade Center site.

Among the authority’s list of banned items: violent images that could scare children, material that could “incite or provoke violence,” and ads for escort services and tobacco products. Then there is the provision about depicting sexual activities in an offensive manner, which leaves room for interpretation.

An ad on the F train has an image of a movie poster depicting the face of a woman in the throes of ecstasy next to the caption, “The heart wants, the flesh takes.” At least one rider sitting near the ad on a recent morning said it seemed inappropriate for children.

“I glanced at it from the side of my eye, but I didn’t really care to read it,” said the passenger, Tara Griffiths, 21, a student at St. John’s University in Queens. “It reminds me of ‘Fifty Shades of Grey.’ ”

Another rider, Adrienne Wolfe, 40, of Brooklyn, said she had seen more explicit ads on television. “That’s not very racy,” she said. “You see it all the time.”

Steward Johnson, 25, a consultant who lives in Midtown Manhattan, was more concerned with the name appearing alongside the image: “Bill de Blasio, Mayor.” The ad promoted the city’s “Made in NY” effort supporting local film production.

“It probably isn’t smart for the mayor to have his name plastered on an advertisement such as this,” Mr. Johnson said with a laugh.

In another car, there were ads in English and Spanish for free “Kyng” size condoms from the city’s health department, part of a continuing public service campaign to promote safe sex. Mr. Rachmany of Dumbo Moving argues that those ads are more explicit than his because they refer directly to sex.

His company submitted three ads as part of its protection-themed campaign: the couple touching amid moving boxes, a father clad in industrial goggles changing a diaper, and a man pleading for help from the Mafia. He moved forward with the other two.

The authority reviewed its standards after the request by Gov. Andrew M. Cuomo’s office last year. While it did not result in a formal policy change, officials have worked with advertisers to “come up with a compelling advertising message in a somewhat less explicit way,” Adam Lisberg, a spokesman for the agency, said, adding a comment over the cleavage controversy The News brought about.

“The irony, of course, is that the newspaper which first raised the alarm about the breast augmentation ads runs far more explicit advertisements in their own pages,” said Mr. Lisberg, a former City Hall bureau chief for The News. “So trying to keep a family-friendly public environment in New York City can be challenging.”

Some think the authority may be too cautious. Jason Dorsey, the chief strategy officer at the Center for Generational Kinetics, which studies marketing to young people, said the message was not harmful.

“We think it’s always good for millennials to be reminded about being safe, even if it’s under the guise of a moving company trying to stand out,” he said.

Mr. Rachmany readily admits he was seeking to drive sales. He still wanted to use the image, so he has splashed it on the side of a few moving trucks.

“We’re always going to push the envelope,” he said.