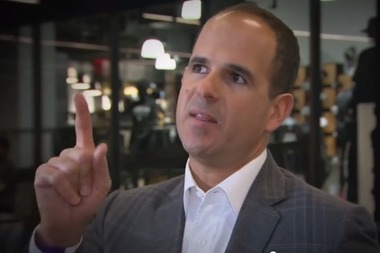 INWOOD — An Uptown cupcake shop that has been beset by difficulties will get another chance with some help from reality TV.

Tonnie’s Minis, which has opened and closed several times since leasing its space at 4738 Broadway two years ago, will be featured on the CNBC reality show “The Profit” this May. The show chronicles the projects ofMarcus Lemonis, CEO of the multibillion-dollar recreational vehicle company Camping World.

As part of the show, Lemonis invests in struggling small businesses and provides the owners with guidance in exchange for an ownership stake in their companies.

Over the course of two seasons, Lemonis has invested more than $14 million of his own money in the businesses, according to the network.

Tonnie Rozier, owner of Tonnie’s Minis, said that taking part in the show known for its tough-love approach has been an emotional roller coaster.

“It started out with being very hopeful to then being very nervous to being frustrated to today being elated,” he explained. “I’m beyond happy.”

Rozier’s wife nominated the store for “The Profit” in June 2014 when the business was in the midst of a rough patch.

Rozier told DNAinfo New York in November that a series of bad business decisions and an ongoing problem with the Health Departmentover a specialized sink led him to temporarily close the shop twice in 2014.

The store reopened in late October with a redesigned interior and a new business model that emphasized a “design your own cupcake” bar that had been popular at Tonnie’s flagship store in Harlem.

While business has improved slightly since then, Rozier said the frequent openings and closings have cost him.

“Once people taste the product they come back, but no one new was coming in,” he said. “It was just the ones who had had it before.”

That’s when he got the call from “The Profit.”

Rozier started working with Lemonis a few weeks ago, forcing the shop to close to walk-ins. Since then, there have already been some major changes to the business.

For one, the Inwood storefront has gotten a facelift to help emphasize the “design your own cupcake” concept. In addition, Rozier said that Lemonis has made it possible for him to beef up his wholesale business by putting a production system in place.

Rozier said he and Lemonis are also in talks with Macy’s about the possibility of opening a Tonnie’s Minis at the store’s Herald Square location.

“I probably couldn’t have considered that without the help of Marcus,” he said.

Rozier said that while working with Lemonis has had its challenging moments, it has taught him to listen and to not act impulsively, something that has gotten his business into trouble in the past.

“Before it was my idea, my way. Whatever comes to mind, I’m just going to do it,” he explained. “Now, there’s a plan of action. There’s a blueprint…We don’t move without a system being in place.”

He hopes that the Inwood store will reopen sometime in March, and said there will be a grand opening event announced to the neighborhood when the date is determined.

Rozier’s future goals for Tonnie’s Minis include opening other stores and ensuring that they are financially sound, as well as increasing his wholesale business.

He is hopeful about the future.

“2014 turned out to be an amazing year on both sides of it,” Rozier said. “It was amazing on the negative side and that turned into being even more amazing on the positive side. So far, in 2015, it just feels like the entire sky opened up.”

Tonnie’s Minis will be featured on the third season of “The Profit,” which begins airing in May.